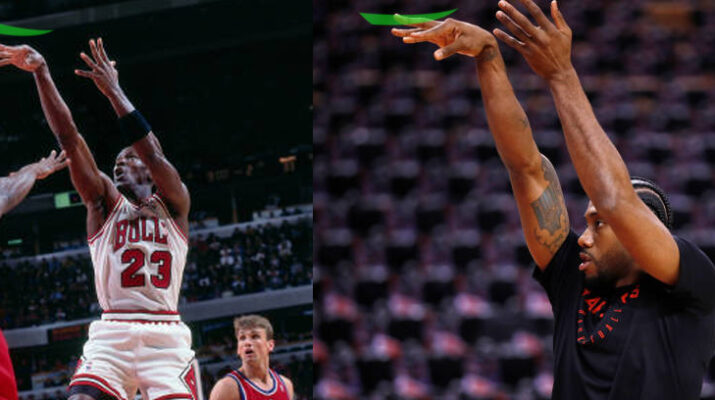 Hard hand shooting form is good for control the release force, it always very stable in the basketball game, especially when you taking a mid-shot or closed to the hoop. The hard hand representative players are Michael Jordan, Tim Duncan, Shaquille O’Neal, Hakeem Olajuwon, etc. Recently many members here sugest me to analyze Kawhi Leonard’s shots, today I  will analyze the shooting form of Kawhi Leonard. We can see the right hand was also not pressed in the pic upon. This will made his shot with a little more force, if you can preparing to press the ball when you were just catch the ball, your shot will be more easy and with less force.

Kawhi Leonard’s left hand position is perfect, this is a big help for keeping his release force stable: We can see his left hand is almost all on the ball, and the fingers pressed the ball to his right palm from the right above. But we can see his right wrist is not over against the hoop, then your release force will a little difficult into the straight line.

Michael Jordan is shoot with fully sideways shooting form, this tip can lead your right arm free and with less interferences: Kawhi Leonard is still not in this range, he is almost with frontal shot: Check the pics above, we can see the fingertips are all upwarp, this is the 1st feature of Michael Jordan’s hand type, when you have this feature when you releasing the ball, this means you can rolling the ball just like Michael Jordan.