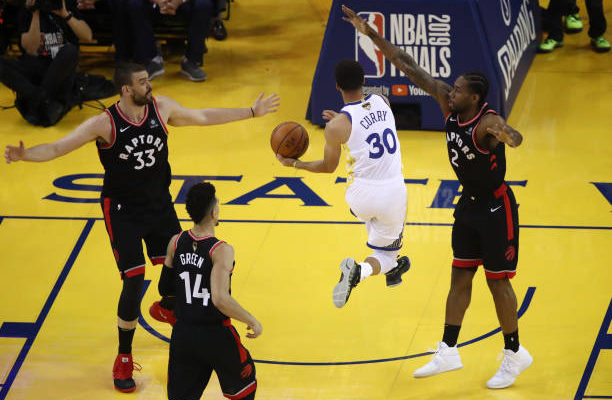 In the Game 2, Stphen Curry have no shots in 4th period, he still not found the right way to dominate the NBA finals for the clutch shots.

Actually, Stephen Curry’s shooting control ability is the top level, but he almost lost his self-confidence, some of this is because of his experience in his high school, and some reason is the soft hand shooting form need relaxing status. In my mind, Golden State Warriors almost found the correct tactics when VS Houston Rockets, in the 4th period, the whole GSW players all shot in mid-range, thery became unstoppable, and when the Rockets’s players defend for the mid-shots, they got more good chances for the three point shooting.

But very pity they just played only one game with this statics, or the NBA 2019 FInals would be changed. Except this, Stephen Curry’s personal problem still not be improved. How to find the best chance to shoot a three? This article I will share some method for you.

Because of his best shooting skills, Stephen Curry can shoot from everywhere on the half-court, but if he try to find three point shooting chances almost everytime, the opponents will be easy to defend you, because you just run into a little piece area. Actually, Stephen Curry’s mid-shot is still better than the others, when the most teammates hurts, take more mid-shot can give us more chances to take a three point shot, and better than the substitutions wasted the good shooting chances, because our live space is larger.

In the NBA Finals, almost all players played harder than in the regular season, so the quick release will have a lower shooting average. At this time, more hang jump shot can easy to get far away from the defenders hands.

And hang jump shot has many advantages, the most important thing is the hang jump shot can jump to every orientation, not only vertical upward jump, but to all directions. This can help you easy to jump and get far away from the defenders in the air. And if you can not get rid of the defenders, you can still jump to shoot.

3. Run and Run and Crossover to Shoot

This is the most practical skills in the NBA Finals, in the critical moments, the dribbling no need too many motion, the simple, the better. You just run and run and stop running suddenly, then take a jump shot or fade away. This skill can lead you find more and more shooting spaces.

Just run and run, and then stop or crossover, then, the large space is here.

One thought on “Stephen Curry: Mid-Shot Can Dominate The NBA Finals”