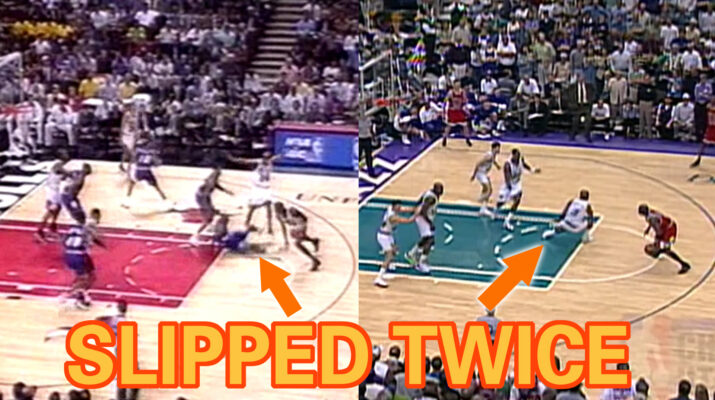 His technology is up to the top level, his hang jump shot, his footwork, his block, his dunk, his steal, his read game ability are all top level. This time I will show you a secret of Michael Jordan’s last shot. Many person thought the last shot made Bryon Russell slipped was an accident, but actually, this was evolved from another successful slippped case.

Michael Jordan has a good habit, he always research his game video after the game. He developed many undefendable technologies from the games, such as his fade away, his hang shot and his footwork.

The clutch shot is the most important, he can shoot and score face to Bryon Russell without crossover. But of course, it was not enough.

When the game 4 of the NBA finals, it comes. Michael Jordan catch the ball, break through Bryon Russell, and then, crossover, watch here, Bryon Russell slipped:

And then, jump shot, a frontal shot, dropped in.

This was a successful slipped offensive case, when MJ researched his game video, he must observe this slip, and try his best to evolve it, make the set-piece perfect, make it undefendable.

And we know, he did it. We always said: Chance favors only the prepared mind. That is.

In the last game of 1998, the last shot appeared, the same position, the same defender, the chance was coming:

Michael Jordan made his center of gravity much more lower, his stride longer, the range of his motion was bigger.