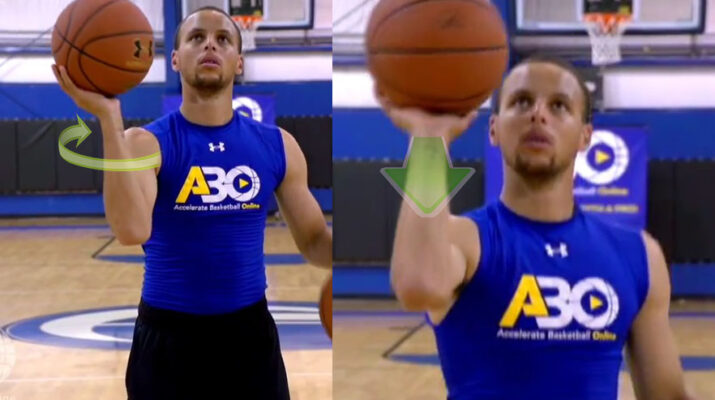 This tip I have said several times before, no matter what kind of shooting forms you want to take, the release point is the most important, every top level play must train this. But the private workout videos are really rare, so many members always train a shooting form just the NBA players’ game shooting forms.

All excellent shooting forms cannot be completed in just one dat, even one year. We must through the phases of beginner, experienced player and professional players. The shooting posture is also improved day by day.

This post I will show you how Stephen Curry train his release point, after this post, you should know how to improve your shooting form.

Check the gif pic below:

In the picture we can see the right arm appear absolute low elbow shooting form feature, this is the real set point of Stephen Curry. These are two different shots, but we can difficult to find the differences between the two shots. That means Stephen Curry trained his set point in top level, he can release the ball with the same postures, it was a chronic motion.

Only you trained your release point millions of times, your shooting form can be like this. When you was a beginer, you should just train your set point under the hoop with two hands, the left hand can help your right hand in the correct position much more easier. After you played basketball one or two yeas later, you can train the one hand set point on the free throw line.

Why Stepehn Curry right hand shoot and left hand dribble? This is to train your release skill into a subconscious movement, many 3+1 shots because of this.

This pic is very important, we can see the revolve wrist skill and frontal wrist feature, and we can also see Steph’s release point is from the right shoulder not from the forehead. So this is the key, the players who felt your release feeling was not comfortable is just because you were not train your normal set point like this.

Several years before, I have shared a top level skill on shotnba.com, it called revolve wrist skill, this skill is appeared in Michael Jordan’s fade away. This skill is also for the straight shooting force theory, wrist revolved to the frontal wrist, will be good for preparing shoot with straight force.

Lets check the pic below: The frontal wrist release skill is also a keypoint for your setpoint, after this motion, your release force will easy into a straight line, because your five fingers are all front to the hoop and in a straight line. The five fingers roll the ball into the same direction, your release force will be more stable: We can see the details of how Stephen Curry release the ball with a pure straight force. And We can also check his right hand is from his right shoulder in the frontal view: Release from here can lead your shooting force into a pure straight line, and your hand feeling will be more smooth.