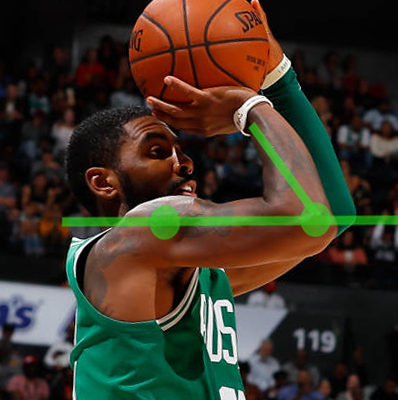 Kyrie Irving is one of the best basketball palyers in NBA and especially he is a good shooter. He won the NBA Three-Point Shootout in 2013, and he led the Boston Celtics got a amazing performance, 22 won 4 lost, Celtics now is still the No.1 of this NBA season.

Why he can make so many achievements, the most important reason is his shooting form very scientific and rational. If you read my article carefully and you really know the meaning of my Straight Force Shooting Theory, you will know that our right elbow position is very important for our shooting ( for righty players, if you are lefty player, just imaging your left elbow corresponding position). In the Straight Force Shooting Theory article, I have mentioned many times that a good shooting set point must with a low elbow position. If your shooting set point with high elbow position, your shooting foundation will be unstable, your upper body will be easy to shake. I have test more than 10 good set point shooting forms in the last 10 years, finally I found when our main arm at horizontal line or even a little low, we will find our shooting get more comfortable and easily. Such as Stephen Curry, Ray Allen, Reggie Miller, Michael Jordan, Kyrie Irving, Steve Nash, etc. Why Kyrie Irving’s shooting so good, the most importand reason is he shoot with the low elbow shooting set point. Now let me share you the details: The right forearm is not vertical so you do not need use 3 90 degree theory in Irving’s shooting form, of course the same with Stephen Curry’s shooting form. The intersection angle between main arm and forearm is very small, that will make you shoot a long three easily. Kyrie Irving is a long shot player, in NBA nowadays, almost all good shooter’s right hands are not shooting with empty palm. We all shoot with full hand force, this skill will make you ctach ball tight and use your most of power to shoot. If you shoot with empty palm, you will waste some of your shooting force.